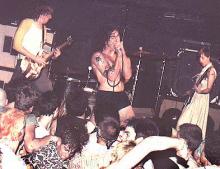 Before the term “punk hardcore” was invented to describe the music of Black Flag and other LA bands, Black Flag was just seen as another punk band. “Nervous Breakdown,” their first release, sounds much more like old school punk rock rather than punk hardcore per se.

Black Flag went through a number of different singers before settling on Henry Rollins, and this track is from well before Rollins' time with the band. The singer is actually Keith Morris, later of the Circle Jerks. After he left and started his own band, Black Flag continued under the leadership of guitarist Greg Ginn. Since Ginn was the band's primary songwriter, it wasn't too difficult for them to just hire a new singer whenever they needed to.

In fact, Black Flag fans were so devoted to their favorite band that the band was even able to tour without a singer when it needed to, relying on random fans pulled out from the audience to sing their songs. That's how Rollins eventually got the job, by stepping up to sing for the band when they were playing in the DC area. They were impressed enough to give him an official audition, and then the job of being their new singer.

Rollins sang in a completely different style from Keith Morris, who sounds more like a New York or London punk vocalist of that time period. Both Rollins and his immediate predecessor Dez Cadena sang in a full-throated growl that contributed to the distinct “punk hardcore” sound.