The Boneless Ones: Skate Punk Gets All Metal and Junk

The Boneless Ones: Skate Punk Gets All Metal and Junk 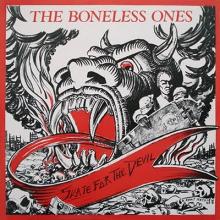 When someone tosses out the phrase ‘skate-punk,’ it’s usually followed by a discussion of East Bay punk bands from the eighties or maybe NOFX. But for the most part, the more metallic side of things is left out. The Boneless Ones, who were around the Bay back then, were not really metal, but capable of incorporating some hard rock leanings of that other genre while writing songs about shredding and that old red dude with horns.

Suicidal Tendencies might be pretty funny to listen to at this late date. The Boneless Ones don’t go and get that ridiculous, but there are few moments on Skate for the Devil that listeners will find worth going back to over and over again. If this soundtracked your teenage years, though, you get a pass.

What’s most amusing about all of this is the fact that the Boneless Ones only have two ways of opening a song. One option, as on “Rock and Roll Slob,” is to begin with a bassline rumbling around, just busy enough to fool a few folks into thinking this was a technically proficient band. Maybe the following guitar solo was proof. Or maybe it isn’t. Depends on one’s opinion of wanking in the middle of an almost punk track.

The other way these guys went about starting songs was to include some low key, purposeful cerebral guitar chording. “We Believe in You” is all Chuck Berry practice before the Boneless Ones take it into boring rock territory. Whatever the case, though, the band’s gonna appeal to some hamfisted, dull eyed thirty five year olds who remember the glory days.