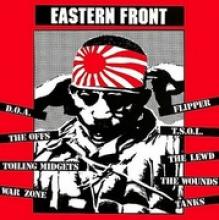 Tagging the first Eastern Front compilation with the word classic really isn’t too accurate. The disc comprises a spate of tracks that tote more historical significance than anything else. Of course, there’re still a lot of folks who eat this stuff up. For what reason, who knows? But I’ll still toss on the Partisans or whatever other second tier Brit punk group I grew up on. So, really there’s no accounting for taste.

Anyway, there’re three Eastern Front discs – the second counting some contemporaries of the folks represented here with the third focusing on metal. Either way, with the huge number of comps being issued back in the early eighties (it was probably easier to wrangle money and material than having one group do it all) more than a few other discs rank as a bit more important and moreover, entertaining.

There’re some big names here, however. D.O.A. contributes a pair of tracks neither of which do too much for its legacy – and really, the band just counts as a time marker in the march towards hardcore’s codification. But a number of the group’s here went on to relative notoriety, deserved or not.

After Warzone’s “Marriage of Convenience” and just before moving into “Yahoo,” the group’s singer says, “You’ll be happy to know, this is our last song.” Probably, show goers were upset. Warzone and bands of its ilk (any ensemble naming themselves after sub-par Japanese hardcore acts) had and continue to have a huge backing. The appreciation is probably more visceral than anything else. The music certainly isn’t any good. But it’s an understandable situation. The utter abandon for anything other than a self constructed set of rules can render a band an interesting thing whether or not it’s any good.

Flipper shows up for a minute and turns in more mediocre work that should cause listeners to wonder why anyone ever cared about the band despite the fact that Krist Novoselic from Nirvana is currently playing bass with them.

The real highlight – maybe the only one – comes from the Offs songbook. The group isn’t generally recalled today for anything. But it rubbed shoulders with groups pretty early on in the Bay Area scene. And regardless of what one might think of ska, the Offs were able to do it relatively well. The track here, “One More Shot,” comes off a bit like the Contortions if that group wasn’t way too wacky. Unfortunately, the three minutes of skronky funk doesn’t make up for the rest of the album, no matter how diverse it is.