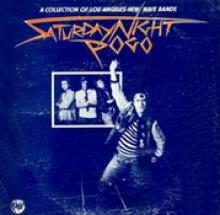 Affixing the word classic to Saturday Night Pogo is pure hyperbole. The tracks here – for the most part – that are actually worth listening to are available elsewhere. But when the compilation was issued as Rhino Records’ third release it was probably something of a revelation. Coming out in 1978, the disc shares space with Cleveland Confidential and other scene-specific works from that era. That being said, the huge names from Los Angeles’ scene aren’t here. It was pretty early on, though.

The Saturday Night Fever reference is an interesting cultural artifact. Positioning itself in direct opposition to the awful dance music populating radio stations and dance floors across the nation makes proper sense. But in an move that no one could have properly calculated, having Richard Meltzer, then lead singer in VOM, pose for the album’s cover lends the disc a cache it might not carry otherwise.

We’ll get to VOM in a minute. As for Meltzer, he ranks as one of criticism’s most valiant and engaging voices of the post CREEM era. His works have encompassed more than music even as he’s touched on a huge number of disparate genres. That being said, VOM’s not really that terrific a band. And probably is recalled at this point for Meltzer’s inclusion in its line up as well as issuing some relatively early, independent singles.

Alongside VOM’s work are a spate of tracks that point to how punk was at one time something of an all inclusive idea instead of having a set of dress codes – that goes for whatever movements have cropped up since: re-garage, indie, whatever. The Motels, most would agree, don’t have enough tenacity to hold a listeners attention, but the fact that the band earned (or was granted entrance) to this track listing amply displays the freewheeling nature of independent music from a few decades back.

Unfortunately, there’s not really a stand out track – the Dils even contribute a pretty boring cut that’s easily located on whatever compilations of its work floating around now. Again, Meltzer’s picture pretty much validates the entire endeavor, so take a listen and learn something.