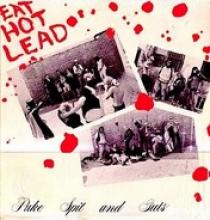 In the annals of punk rock drudgery, there’ve been some pretty lackluster acts. A few get over on the sheer tenacity of its act. A few for the scarcity in which its albums were pressed, rendering it a collector scum’s wet dream. But the worst of all this nonsense is really why people think punk is an awful waste of time.

Yeah, sixties punk stuff can be digested as the death rattle of hard psych, stripped to its minimal core. And by extension, all the proto-punk/hard rock stuff of the seventies shouldn’t be difficult to sell off to non-punk listeners. But with Puke, Spit and Guts, there’s really nothing other than attitude. And in this case, that’s just not enough – the collectability of the group’s one album, though, has made ‘em something of note. Only that, though, has saved these scum from total anonymity.

Two of the most succinct blasts of punk ever – the Queers’ “This Place Sucks” and the Quincy Punx “Eat a Bowl of Fuck” – can’t claim any sort of nuanced song writing. Both of those cuts, though, so far surpass “Scratch and Sniff” from Eat Hot Lead, Puke, Spit and Guts’ album dating to 1980. The band wants to do it in the back…and the front. That’s all well and good (kinda). But the group’s inability to decide if it’s an updated, late sixties’ band or an inept punk group makes it all more ridiculous and unlistenable than anything.

Musicality aside, the group counts as one of the few punk acts I can manage to summon that switched off between male and female vocals – X, obviously. The Avengers (waaaay overrated), but that’s about all. And while each of those groups were well into (or past) its career by 1980, Puke, Spit and Guts were still kicking around.

Hailing from Los Angeles, though, makes it all seem odd and even more distant and useless seeing as the scene down there was big enough to include just about anyone. That’s why it’s odd that Puke, Spit and Guts haven’t cropped up in too many other places. Again, though, the band’s indecisive stance on what it actually was going to sound like probably had something to do with that. Of course, Captain Worm and Dick Head (those are the names which appear on the album) look a good bit older than the hardcore kids that were kicking around at the time. So maybe that was the reason…nah. It was the music. Pass on this one.