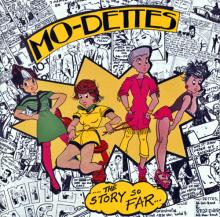 The secret history of Girl Punk hasn’t as of yet been brought to light. There’ve been relatively recent compilations seeking to round up various bands’ output. But for the most part it all seems like second tier work. With the recent passing of the Slits’ Ari Up, it wouldn’t be too difficult someone right now working on a way to honor not just her, but the lineage she’s a part of.

It’d be a stretch to say that the Mo-Dettes are in some way directly related to Ari Up. They’re not really. But Kate Korris did time in the Slits as well as the Raincoats. Here inclusion on guitar makes the Mo-Dettes a bit more interesting then the group would have been otherwise even as the group seems more adept at its instruments than the aforementioned band or the LiLiPuT/Kleenex axis, which contributed the Mo-Dettes singer Ramona Carlier to the mix.

It might be the odd, international flavor that makes this particular band stand out. At the same time, though, the musically adept quartet musically surpasses a number of its then current peers – make or female.

With a consistent Jamaican vibe pushing throughout the band’s discography, thanks to Brit bassist Jane Crockford songs that shouldn’t reek of sweet and weed still do. “Bedtime Stories” wouldn’t ever be categorized as a dance track or a reggae effort. But it wouldn’t be too difficult for any Jamaican based producer to isolate the bassline bolstering the track and work up a stunning dub. Crockford, apparently, ranks as one of the great, lost bassists of punks first wave along with Glen Matlock (we’ll just through Jah Wobble in there for good measure even as he’s neither of the first wave or a member of a proper punk group. Just P.I.L.)

Either way, the Mo-Dettes were only able to record a few singles and cobble it all together in the form of The Story So Far before breaking up. The album as an artifact, though, serves to lend insight regarding the various sides Brit punk had conjured by the early eighties. Don’t call this post punk, but there is a heavy funk thing at work, inextricable from those reggae basslines. And even with some quick step drumming, there’s no way to shake the feeling.

Odd for groups of this ilk, melodies are really left up to the singer as the Mo-Dettes saw fit to bury the guitar pretty deep in the mix. Good stuffs through and through, despite that issue.


The Delinquents: Maybe More Than a Footnote