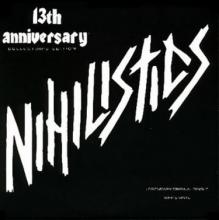 It’s kind of comforting that after the early eighties, hardcore broke down into disparate camps, making the long march through auld tyme material a bit easier than with genres like post-punk or whatever else.

Nihilistics weren’t ever lauded for their originality – granted the group’s first single came out in ’82, so maybe that’s more than enough originality right there. And it might be a well wrought criticism to figure the band didn’t progress musically or lyrical beyond that first release. Change, in hardcore, though, is a rare thing. Even if it wasn’t, though, Nihilistics might have wound up sounding like AC/DC or worse.

Issued during the opening moments of the eighties, the self titled single counts five songs in about six minutes. So, even if I weren’t about to include some abstracted notion of what this whole thing sounded like, you’d be able to guess.

Well, it boarders on nascent thrash. An audible chord or two is all that’s made it through the last three decades. And those drumbeats are really just a blur of clapped together hi-hats and a few crashes. Not unique to the version of “No Friends” included here, nor hardcore in general, is that fuzzed out bass-tone probably resulting from an attached amp not being able to handle what it was charged with instead of any calculated decisions. As indefinable as the croaking bass amp is, the intent of song – either recorded version will do – quickly finds its end and its off to the next fifty second song. It’s all pretty much reimagining what’s come before subsequently even though “Combat Stance” kinda sounds like a Cramps song somehow.

Calling it quits a few years on, Nihilistics would get back together for a bit coinciding with Seattle’s rise to prominence. That all petered out again with the band sporadically performing in the new millennium.

Now, I’ve not been privy to any live show by this group, but it’s pretty safe to assume that catching their act live at this point would be disappointing for a few reasons. Let’s dispense with the forty-year old dudes playing hardcore that’s thirty years old. Beyond that, the amassed concert goers collected for such an event probably wouldn’t count as good company in a bar. Just a guess.


A Minute with Johnny Witmer from the Stitches (Part Two)


On Tony Rettman and Killed By Hardcore (Part One)