Toxin III: Not as Racist as Skrewdriver, but at least it's American

Toxin III: Not as Racist as Skrewdriver, but at least it's American 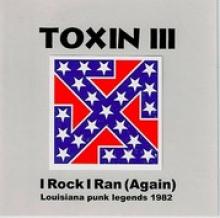 The most incredible thing about Toxin III and how some folks from the backwoods of Louisiana found punk in the waning moments of the seventies is that a piece written by Nick Tosches for Rolling Stone on Patti Smith interested band members.

That’s a tremendously powerful perspective on journalism. But totally appropriate in some instances.

Most noticeable about Toxin III is the logo it used on the cover of its one single. Combining the confederate flag and a swastika in addition to hailing from the deep south probably makes folks believe Toxin III to be a fascist band. Maybe they are, but an admitted love of the Clash might dispute that fact. Regardless of the group’s political leanings – which might be obfuscated by “Seig Heil Rock ‘n Roll” after a cursory listen – its recorded legacy seems as strong as just about any unknown group hailing from the first wave of punk.

Finding itself anthologized on one of the Killed By Death compilations, Toxin III eventually got itself a proper release of the collected works it recorded. And oddly enough, there’s been some international attention for the group. Let’s just hope that there’s no reunion gig. We all know how hillbillies age. It’s not always pretty.

Anyway, lumped together on I Rock I Ran (Again) are some studio works and demos. There’s nothing present that completely changes the way one might look at punk. But between the title track, which opens the album, and the aforementioned “Seig Heil Rock ‘n Roll” there’s really no reason to miss this one.

What’s impressive here, though, is that the band is able to work within the most stringent guidelines of the punk genre and then push it’s limits. Again, these guys don’t get all jazzy or improvise a tremendous amount, but a pair of songs at the heart of this album amply portray an ensemble that could have done more than it did.

“Is It Really Dead ?” all of a sudden gets extraordinarily funk and seems as if it might have come from the Gang of Four back catalog. After one takes in the funky drumming and heavy bass-line, the discordant guitar is just about shocking.

Continuing on in a minimal vein the following “Middle Class” almost sounds like the Jam’s rhythm section working out with some NYC minimal guitarist. The vocals even come off as a nascent rap. It’s all things at once.

Less fascism here than one would expect, but some ferociously persistent punk.


The Makers Makin' it Through Another Decade