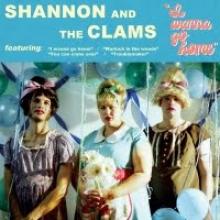 Um. The Bay Area might sport some enticing shoreline views, but one thing it doesn’t have are a spate of hospitable beaches. The poorly named Ocean Beach, right down there near Golden Gate Park and its open air drug mart, is kinda gross, rife with nasty lookin’ hobos, but above all, the water’s not warm. The water isn’t really any better in the East Bay – although the Emeryville Marina’s hospitable, unless it’s a holiday or you run into a buncha fisherman. So, naming a band, based in Oakland, Shannon and the Clams, then going on to proclaim beach bands as sturdy influences while wearing vacation gear rings a bit hollow.

Oh, the music. It ain’t band, if not ridiculously similar to the wealth of Bay Area acts mining classic garage sounds and doo-woppy harmonies. Issuing a few discs on 1234 Records didn’t hurt these Clams even as the band doesn’t seem to sport a wide reaching fan base. This isn’t a case of band wagon hoppin’ gone wrong. Shannon and company just seemed to have inserted a bit too much girl group crooning for the general (read: underground) listenership to pick up on. Efforts like “Surrounded By Ghosts” are incredible base solely on its vocals. The musical accompaniment gets a bit dicey and winds up being interchangeable song to song. Wrapping the mediocre package up are all those traditionally sappy love songs – apart from the aforementioned track, of course. If compared to that new B. Spears album, this rules. Compared to anything else mining the same influences, it’s just average.