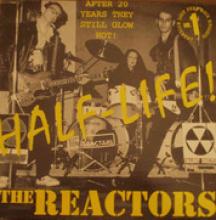 You ready? Here’s all the information pertaining to the Reactors, a KBD affiliated group hailing from Conneticut which relocated to New Yawk to make it big and all.

There ya go. That’s it. The rest is all a venue for my pontificating on the meaning of it all – and after listening to the band’s collected works, as issued through the Italian imprint Rave Up Records, I’m not too sure that it means much of anything.

According to some commenter over at KBD Records, Ginzburg, since the band’s dissolution, has been engaged with car racing of some variety. A scurrilous source, surely. And if it were true, it wouldn’t make any more sense. Of course, someone fabricating such a story about a guy who fronted a band that no one really remembers shouldn’t be plausible.

Despite that piece of (mis)information, it’s still interesting to hear the band turn in tracks which might have come from disparate sources – that means the group had an unwieldy sound. Veering from the snot inherent in those aforementioned efforts to the psycho pop construction “Time Belongs to Us” is a shock. That track alone might not be strong enough to warrant the semblance of collector fervor surrounding the group’s work, but collectors do what they gotta. “Time Belongs to Us,” apart from Ginzburg’s sometimes in key singing really could have made a run at popularity if it were released a bit earlier. But by 1979, the shift to new wave was well underway. And even if the group sported skinny ties and such, the sneering that should be assumed to have accompanied the guitar playing here wouldn’t have gone over too well. Ahhh, they coulda been the Cars or at least produced by Ric Ocasek.

After making it though the Reactors’ collected output, though, the band’s first single, included on KBD #14, is a confounding thing. The group was certainly within the realm of punk stuffs, but the rest of its work is really more poppy than people familiar with that single would expect.

Pop in punk music has been sullied over and over again. We might blame the radio, but that device and the industry backing it still needs (or needed) people willing to create tunes for the medium. So, who’s to blame? Maybe it’s the Reactors. Maybe it’s me, since I certainly put a few pennies in Epitaph’s coffers.