Backed Up Against a Wall 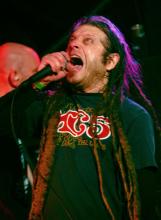 There's an old proverb that says “even a cornered mouse will bite the cat.” I can hardly think of a more appropriate saying for either this song or the current political and economic reality.

The song is “Backed Up Against a Wall” by the Circle Jerks, as sung by Keith Morris (the original singer for Black Flag, way before Henry Rollins joined the band). The video is from the documentary “Decline of Western Civilization.” Even though the words of the song tell punk rockers that they're not going to get anywhere trying to fight the police, the feeling of the song is one of desperate defiance.

You might know perfectly well that you're not going to be able to resist the overwhelming power and capacity for violence of a modern government and its law enforcement services, with their ready access to tear gas, rubber bullets, bean-bag projectiles and batons, and live ammunition waiting to be used if they deem it necessary. Yet even though you know there's no hope of actually beating them, you find yourself standing up anyway, refusing to just let them impose their will on you- and in doing so you claim a measure of dignity you may never have had before. Even if you lose in the end, there is something you win, and it's something they'll never be able to take away.

When the cat has it backed into a corner and there's nowhere left to run, even a mouse will bite. What does it still have to lose?